Even with the rain, it’s just a game 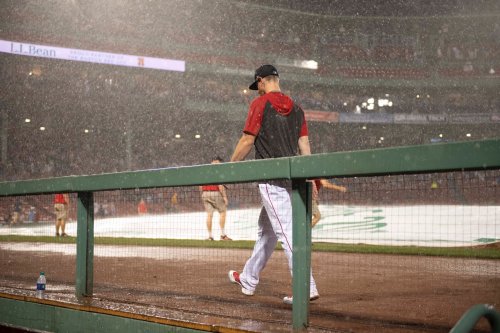 Living within 4.3 miles of Fenway Park, as the crow flies, it shouldn’t be quite such an ordeal getting to a game.

I could walk for about an hour and a half, which isn’t the worst option when the humidity isn’t at its current 114 percent level, where it’s been for the past six weeks. There’s the T, and when it’s actually running, the Red Line to the Green Line should take about 30 minutes. But the red line doesn’t really run these days, and the aforementioned humidity turns Park Street into a sweltering torture chamber. Then there’s driving, which is a more horrible option as each day passes.

But truth be told, these are minor inconveniences. If I was invested and careful with money, I could go see the Red Sox much more often than I do. And with the specter of turning that four mile distance into about 20 looming in the coming weeks, it seemed right to head back out to a game.

I did, and they lost 6-2 to the Kansas City Royals. That’s the least important part of this, though.

It’s easy to lose track of a team that plays every day, or at least take them for granted. Add in an expected level of success, and anything below that mark just increases passivity or rage, depending on a particular fan’s disposition.

I’ve had enough to distract me that I haven’t paid all the attention I used to. But with a move impending, I made it out to the game on Tuesday night, and it was a nice distillation of everything I enjoy about the experience. I had seats in the left field grandstand, enjoyed a beer, kept score and found myself sympathizing with Andrew Cashner, who pitched well outside of his two bombs surrendered to noted-bomb-hitter Jorge Soler.

So after getting home the following night, turning on the game seemed like the right move. The Red Sox looked better, Nathan Eovaldi looked sharper in two innings of relief work than he had, and before long I was in rapt attention. I was also extremely conscious of how ridiculous the rain looked as it streamed across the screen.

I realized that this had moved beyond comforting white noise when NESN’s feed froze — likely weather related —and I found myself pulling up the play-by-play online to see how Brandon Workman would get the Sox through a ninth inning tied at 4-4.

Suddenly I’m invested, and suddenly it’s raining much harder. The signal goes in and out as Mookie Betts, Rafael Devers, Xander Bogaerts and J.D. Martinez tried to score and end the game, and just as Josh Taylor came in for Workman, the downpour became untenable and derailed the game.

Which brings us to the rain delay, the most dreaded of all scenarios for those broadcasting the game and trying to fill space.

So just because actual gameplay has been derailed doesn’t mean the fun has to stop. Enter Brock Holt, who has just been scoring all kinds of entertainment points lately, picking up a camera and pulling out some incredible shots.

That shot above does not have the composition of someone who has just discovered how to make the camera work. In a past life, I would troll through the Associated Press wire looking for photos to fill spaces, and I would’ve grabbed that one for a color page in a heartbeat if it came across my screen.

Meanwhile, NESN did their best to fill the time. When the network was actually broadcasting, they broke down Eovaldi’s blown save and other aspects of the game, replayed some interviews from earlier in the week, including Jim Rice teaching Manny Ramirez how to play golf, and then began the inevitable exercise of taking questions from Twitter. One question came over in Spanish, so Manny Delcarmen took over:

Tom Caron: “Well if we knew that we wouldn’t be wasting your time!”

So there’s that intrigue — relevance in the standings or not, this is still a Major League game tied after nine innings. It’s an official game, Kansas City doesn’t return to Boston in 2019 and Boston doesn’t travel there. So what happens? There hasn’t been a tie since 2003, when the New York Yankees and Baltimore Orioles ended 1-1 after five innings thanks to some uncooperative weather.

Through the rain and busted transmissions and confusion, an answer came in around 1 a.m. after I’d packed it in and gone to bed; they’ll resume on Aug. 22nd, with Taylor on the mound and Meibrys Viloria facing a 2-1 count, assuming they’re both still on their respective rosters. Thus concludes a weird night for baseball.

I’ve mentioned this before, but there is something liberating about baseball games played with no ulterior motive. There isn’t a pennant in the balance or a race to the finish, it’s just a game. It marks the time and it counts in the record books and tomorrow they’ll play another and another the day after that.

Maybe that’s why I’ve taken to Holt so much in the past few years. He came to prominence during a stretch in the American League cellar in between World Series wins, and just seems like he comes to play every day. It doesn’t much matter where he plays in the field or where he’s hitting, or if he starts or comes in off the bench, but he just plays and enjoys himself. It’s just a game. There’s no reason not to enjoy it as much as possible.

And it doesn’t matter that the Aug. 22nd result likely won’t matter much. It’ll be a curiosity, both in the moment and to be discovered later by someone searching for prior suspended games. Maybe Viloria drives in a go-ahead run for the Royals, maybe Holt wins it for the home team in the bottom of the inning, maybe they play an extra nine innings before someone scores. It’s all baseball, and it’s all good.

In that spirit, I’ll try to make it to another game this weekend, and maybe one more after that this month. Taking advantage of this thing while it’s in my backyard seems important, or at the very least, it’s what I want to do. I’ll hope the rain clouds hold off for those, but if they roll in, so it goes. It’s just a game.