Blaine Lacher and the virtue of patience 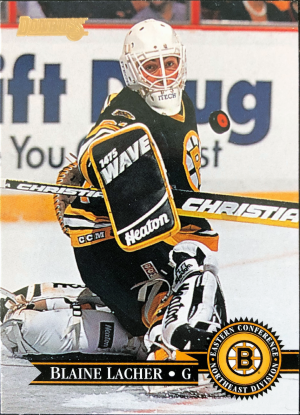 In early 1995, I took my relatively new black Boston Bruins sweater to a sports store in New Bedford to get some gold numbers placed on it. In anticipation of this, I remember weighing whether to get Cam Neely’s no. 8 or Ray Bourque’s 77 on the back, or perhaps Adam Oates’ 12. I think even Don Sweeney’s 32 came into consideration.

That I walked in and — without hesitation — requested Blaine Lacher’s name and no. 31 be heat-sealed to this thing should attest to how ridiculously hot Lacher was at the start of his career.

Fresh off a national championship at Lake Superior State, Lacher entered a vacuum in the Bruins’ goalie depth, with just veteran Vincent Riendeau, who had served as Jon Casey’s backup, as a viable option. Casey had been allowed to walk as a free agent, while John Blue had been decamped to Providence in the AHL.

The NHL returned to play from the lockout in late January, and by the end of the month, Lacher was 3-1 with an absurd .958 save percentage and 0.98 goals against average. Lacher wound up appearing in 35 of the Bruins’ 48 games that season, plus all five starts in the playoffs. He finished fifth in the Calder Trophy voting (losing out to some guy who no one ever heard from again), and the Bruins had their goaltender for at least the next decade. END_OF_DOCUMENT_TOKEN_TO_BE_REPLACED

When the Bruins were more an idea than a team 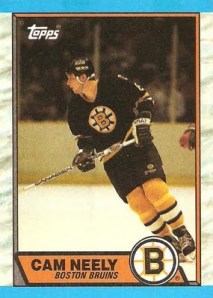 Cam Neely was the main source of my happiness as a Bruins fan early on.

Through the past three seasons, the Boston Bruins have worked, improved and developed actual hopes with an actual plan and built an actual team that, hopefully soon, should be able to make a run at a championship. Last night, they finished off the Buffalo Sabres in the first round, and are waiting to see if they’ll face Pittsburgh or Buffalo in the second. Miroslav Satan scored the game-winner, and David Krecji had two of his own. It was a great moment for a Bruins fan.

But until the Bruins defeated Montreal in a wild Game 6 in the opening round of the 2008 Stanely Cup playoffs, I realized that many of my favorite moments with the team weren’t team moments at all. Since 1992 or so, they just hadn’t had that many memorable wins. The two that could qualify — Anson Carter’s goal to eliminate the Carolina Hurricanes in 1999, and Glen Murray’s double overtime winner in Game 4 against the Canadiens in 2004 — were quickly nullified in my memory by losses soon to follow.

Sturm’s Game 6 goal was too good to fade. Not even a quick 5-0 thrashing at the hands of Alex Kovalev and company could take the shine off of what the Bruins had accomplished. They’d brought hockey back to the middle, and taken the Gallery Gods to a high not felt in 20 years. They had created hope, organically.

Until recently, my favorite moments were a hodgepodge of singular moments of greatness that happened to involve my favorite team. Here were my top five:

My memory of Jan. 22, 1995 is one of mostly giddiness. Camped out downstairs, I had a tape in the VCR to capture the first game of the 1995 season, trimmed in half by the lockout that also killed that year’s All-Star Game.

The Bruins opened up the season against the Flyers, and Neely, far and away my favorite athlete past and present, picked up three goals to give Boston a win. Funny enough, that also marked the debut of rookie goalie Blaine Lacher, who figures heavily in our next moment.

4. I get my first Bruins jersey 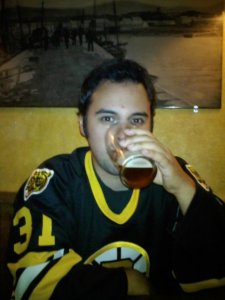 On my 27th birthday, my first B's sweater still fit like a charm.

Christmas 1994, I got my first Bruins jersey, a black model with no name or number. It was a size L, and being in 7th grade, this basically made it a dress that I wore with the sleeves rolled up past the stripes. It didn’t matter. It instantly became my favorite article of clothing, even if my friends thought it was hilarious to punch me on the bear stiched onto the shoulders whenever I wore it.

After a couple of months, I brought it to a store to have a number put on it. In a moment of poor judgement, I went with not my beloved Neely, but with Lacher, a hot rookie goalie. I have a thing with goalies (I always wanted to be one), and I wanted to be first on the bandwagon.

Lacher had a good first season, a horrifying second one, and never got to have a third in the NHL. But that jersey now fits me properly (you have to appreciate just how oversized it was), and walking around in Lacher’s 31 sweater is pretty hilarious. I have a few other Bruins sweaters now, but I know which one will always be my favorite.

3. Everything PJ Stock did.

PJ Stock was a left wing from Montreal, Quebec, who scored five goals in his NHL career (plus one memorable tally in the ’02 playoffs) and was generously listed at 5’10”. He also, for a brief time, single handedly put the “Bad” back into the Big Bad Bruins.

To say Stock became a cult hero in Boston is to understate just how much he meant for a few quick seasons. The Bruins’ identity as a bruising, punishing team disappeared when Neely’s body betrayed him. With no one to fill the void, the team’s mostly working-class fan base grew restless or lost interest entirely.

The 2001-02 season was an interesting one. Behind the tough-as-nails Bill Guerin, the emerging Joe Thornton, and goal scorers like Brian Rolston, Sergie Samsonov and Glen Murray, the Bruins resumed their winning ways in the regular season. But, by far, the most popular Bruin was Stock. T-shirts denoting members of “STOCK’S ARMY” and “STOCK’S ASS-KICKING CREW” littered the stands and the streets. Every other back had the number 42 with either “Ass Kicker” or, simply, “Stock” on the name plate. He was David fighting a league of Goliaths night after night, and he did it with showmanship and flair to boot.

Eventually, though, the lack of goal scoring led to his falling out of favor with the Bruins, and an eye injury suffered in the AHL ended his career. But, even in 2010, it’s impossible to go to a Bruins game and not see at least one 42 in the stands.

At the age of 11, on Feb. 12, I took in my first Bruins game. I wore my Bruins sweatshirt, got my first Bruins puck (still displayed proudly on my desk), heard my first “bullshit!” chant, and, in the first period, witness my first, and so far only, hat trick in person.

It was Neely, of course, who pulled off the feat against Chris Terreri and the New Jersey Devils in the first period, a natural hat trick, and would’ve added a fourth in the second period were it not disallowed (thus, the cause of the “bullshit” chant). They were his 37th, 38th and 39th goals of the year, and in his 44th game against the Washington Capitals, he scored his 50th and final goal of the season. Mind you, that wasn’t the team’s 44th game. Neely, still suffering greatly from injury, wasn’t able to play on back-to-back nights, had to take other games off here and there, and really was skating on one leg all year. He willed himself to keep scoring whenever he was able to play.

Five games later, he played his last game of the season, and had to sit out of the playoff run. Two years later, he played in his final NHL game, again well short of the playoff run. Early in his career, he was a runaway train. At this stage, he simply had to work harder than everyone to succeed. No one ever tried harder to stay in the lineup, and no one ever did more with a failing body.

From March 6, 2000, to June 9, 2001, I was not a Boston Bruins fan. The Bruins would miss the 2000 and 2001 tournaments, but it didn’t cause much heartbreak. To be clear, I wasn’t rooting against the Bruins at this time. As a matter of fact, I still followed them pretty closely, watched a lot of games, and rooted for folks like Guerin, Samsonov and Dafoe.

But from the moment Ray Bourque was sent, along with Dave Andreychuck, to the Colorado Avalanche, the singular goal and rooting interest was for Bourque to get his name on the Stanley Cup before he retired. And after being knocked out by the Dallas Stars in the 200o Western Conference finals, it was a more desperate rooting situation in the 2001 playoffs.

The Bruins came under a great deal of criticism during this time, and rightfully so. General Manager Harry Sinden won’t be remembered as much for constantly building contending teams, or making the playoffs for a then-record 27 consecutive seasons, but that he failed to build a team to compete with the powers of the league, like Edmonton, Calgary, Pittsburgh and New Jersey. So, at the end of his career, after 20 years, Bourque had to leave for one last chance at the cup.

The fans have also come under criticism, though, for how readily he was celebrated in New England. After he won the Cup, Bourque brought it back to Boston, where he was greeted as a returning hero by thousands of fans. This was seen as pathetic by outsiders (and some notoriously vitriolic writers), that the fans of one team would celebrate the achievements of another club.

They didn’t understand. Bourque’s departure was heartbreaking. He had been the rock on some great teams and some terrible ones, always serving as the perfect captain, and despite giving everything to his team, his team couldn’t give him enough to get his name on the Cup in Boston. The only way his trade could be justified was for him to win the ultimate prize. When he did that, his trade went from heartbreaking to merely bittersweet.

For anyone in New England with a heart and a soul, it was a joyous moment when Joe Sakic handed him the Cup.