Sizemore was good, but he didn’t quite match Evans’ Opening Day record.

At this point in the season, it may finally be safe to assume that all Opening Days, save for the home openers of individual teams that may not have happened yet, are finally in the books. Overseas, Sunday nights, the real thing Monday, the Yankees and Astros finally playing a game on Tuesday, and then teams even getting in a second and sometimes third or fourth game as of yesterday. Baseball is back, officially back, standings count, statistics are being accumulated, and so on.

Focusing squarely on the Monday Opening Day, when most teams played their first game and played most of them in the day, there was no shortage of highlights amid the excitement. Neil Walker hit a walk-off home run in the bottom of the 10th inning to give the Pirates a win over the Cubs. Old friend Alex Gonzalez gave his new team, the Tigers, a game-winning hit against the Royals. The Mets game was delayed when they didn’t have a first baseman on the field, so they’re already in mid-season form.

And here, Grady Sizemore, playing in his first Major League game since 2011, hit a home run in what became a 2-1 loss in Baltimore against the Orioles. Where Opening Day is a time to quickly survey the rest of the league, most of Spring Training was focused on the Red Sox, and Sizemore’s phoenix-like comeback had been the focus. Seeing him already playing well in his first real action seemed like a good harbinger for the upcoming season. END_OF_DOCUMENT_TOKEN_TO_BE_REPLACED

Sometimes, I feel that my borderline pathological need for Red Sox trivia might be a problem.

It’s not like I don’t know enough, or that I have any real need to know any more by heart. It’s not as if Baseball Reference is going to disappear.

When I’m at home and bored, absent-mindedly watching TV or listening to some record I’ve listened to a million times and will listen to a million more, I like to jump on Sporcle and take one of the dozens of Red Sox quizzes that I’ve taken a million times. It passes the 15 minutes and it keeps me sharp, in my lifelong effort to keep all of these jersey numbers and batting averages and starting rotations committed to memory for longer than could possibly be considered healthy.

It goes back to elementary school, lugging baseball almanacs around in my bag so that I could remember that George Brett hit .390 in 1980, that Bob Gibson was the MVP in the 1967 World Series that sunk the Impossible Dream Red Sox (he hit a home run in that Game 7 win in Fenway Park, of course), that the Yankees won five consecutive World Series from 1949-53 and that that was probably reason enough to never root for them. END_OF_DOCUMENT_TOKEN_TO_BE_REPLACED

Tim Naehring and embracing the underdog

Editor’s note: This week, I’m running a week-long tribute to some of my favorite players, stretching from my earliest days to the present. 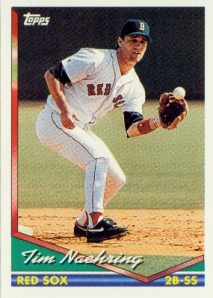 Tim Naehring was the first player I memorialized on a hat. He didn't die or anything, though.

Short of being a contrarian, I typically shy away from the most popular option in whatever setting I’m placed. My favorite band when I was a kid was the Beatles when Vanilla Ice reigned supreme; later, I got into Pearl Jam just as the rest of America seemed to be leaving them behind. I think I was proven correct on both bands.

With baseball players, I shied away from throwing all my fan weight behind the most popular member of the team. Even at a young age, it never felt as though that player — Roger Clemens, for example — really needed any extra juice from me. I was drawn to hardworking players who had staked out a spot, played every day and had style. Dwight Evans and later Mike Greenwell fit that bill nicely, and they each rewarded me with hours of highlights in the process.

But neither Evans or Greenwell could be considered underdogs. Overshadowed? At times, perhaps. But they were All-Stars who made their way onto posters. It took no real leap to get behind either. Tim Naehring, however, was an underdog. END_OF_DOCUMENT_TOKEN_TO_BE_REPLACED

Editor’s note: This week, I’m running a week-long tribute to some of my favorite players, stretching from my earliest days to the present. 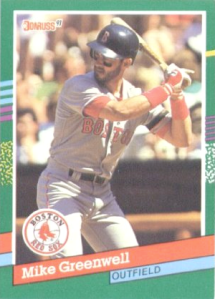 The Gator anchored the Boston lineup.

By the time I was through with third grade, I’d become all too familiar with the reality of retiring athletes. That summer, Larry Bird had hung up his sneakers and Jim Rice had long since hit his last home run.

While not quite on the same level, Dwight Evans was no longer patrolling Fenway Park’s right field in 1991, nor was he penciled in at designated hitter. He actually was playing, a fact revealed by the next year’s baseball cards depicting him in a Baltimore Orioles uniform, but my level of fandom was still at a point where I didn’t realize he was still playing. I knew the history; he’d come up with Boston in 1972, had played forever, hit home runs, threw runners out with ease with his cannon of a right arm, and now that he wasn’t there, he must’ve been gone.

The transition to a new favorite player was necessary, and the choice was obvious. Mike Greenwell, a two-time All-Star, featured player in the 1989 Panini sticker album, and owner of a seemingly unique uniform number (39) was the way to go. END_OF_DOCUMENT_TOKEN_TO_BE_REPLACED

Dwight Evans, and the timeline of favorite players

Editor’s note: This week, pitchers and catchers officially report to training camps across Florida and Arizona, the first signs of spring beyond the unseasonable warmth we’ve felt here in New England. As such, I’m kicking off a week-long tribute to some of my favorite players since the earliest days of my fandom.

Dwight Evans always looked like he was in for a fight, without looking violent.

If nothing else, baseball was always there. In my earliest memories, I can’t remember a time where I didn’t have a basic knowlege of the game, didn’t own a baseball cap, or didn’t know the Boston Red Sox were the home team. The message that a real fan lives and dies with the home team stuck early, a true accomplishment given I was raised in a home without a sports fanatic by any means.

But true baseball fandom began in 1988, and it coincided with a family move to Dartmouth, Mass., and a a new school. Baseball, like Ninja Turtles or Transformers, were a popular topic, and with baseball, every kid seemed to have a favorite player.

The two most popular candidates were either Roger Clemens or Wade Boggs. Clemens was an easy call. He had won two Cy Young awards by that point, won lots of games, struck lots of hitters out and had the amazing ability to throw a baseball 100 mph. Whether or not I or any of my classmates had actually seen this was irrelevant; Roger Clemens could throw 100 mph, and by our analysis, did often and did it at will. If you were watching a game and he didn’t throw one past 100, then you happened to catch him on an off night. END_OF_DOCUMENT_TOKEN_TO_BE_REPLACED