Why not Jaroslav Halak? 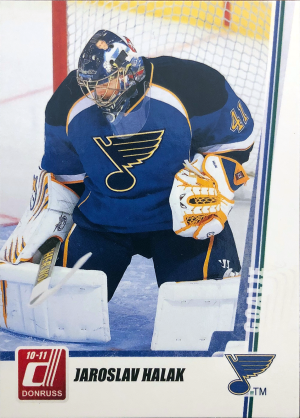 Thinking about the idea of the NHL’s dueling “bubbles,” the image I couldn’t get out of my head was that, best case scenario, this ends with a team getting the Stanley Cup from Gary Bettman and celebrating to the echo of a nearly empty arena. No boos for the commissioner, not even the resigned gaze of those unfortunate fans who have to watch the visiting team hold the trophy aloft.

And because I’m not a player, my real issue with this was from the self-centered perspective of a fan — how is it going to feel watching a team win the championship in a vacant rink?

I don’t have an answer for that, and I won’t until this tournament winds down to a close some time in late September. But I do know, after watching the Bruins set the Carolina Hurricanes aside in five games, that I’m just about as invested as I ever am. I can’t go to a bar with friends to watch a game and I can’t even partake in the futile exercise of seeing how expensive playoff tickets are getting. Even the start times of these games — 11 a.m., 4 p.m., etc. — is messing with my equilibrium, nevermind the incongruous act of watching hockey in the middle of oppressive August heatwaves.

But I’m here, and I’m in, pretty much as deeply as I’m ever in. And while the Bruins are alive in the bubble, I’m in on Jaroslav Halak.

Before that, the news of Tuukka Rask leaving Toronto to be with his family was, if not shocking, somewhere close to it. But he’s been his own man for years, and if vapid, unknowing criticism of his decision is what you’re looking for, there are plenty of dark and stupid places to find that. I hope he’s good and I wish him well — he owes us nothing.

That does leave the Bruins with Halak as the man between the pipes from here on out, though. Easily one of the top-tier backups in the NHL, one who’d be a starter on several teams, he’s the guy now. And success will mean Boston winning with a less-than-ideal situation in net.

Not that it can’t be done, of course. Top to bottom, Boston is still in excellent shape. Patrice Bergeron and David Krejci are already playing at their Stanley Cup best, and with depth through the forward lines and down to the defense, anchored by Charlie McAvoy, Torey Krug and Zdeno Chara, this is a deep, skilled team that can win in offensive blowouts or defensive grinds. Halak doesn’t prevent any of that.

In thinking about him, I kept thinking about Chris Osgood who, without looking it up, felt like a similar goalie — solid, occasionally great, prone to the occasional gaffe, but also capable of backstopping a solid team to the Stanley Cup. And a quick spin on Hockey Reference bore that out somewhat, with Osgood ranking there near Halak. But there were some truly elite names on those scores, too — Grant Fuhr, Mike Vernon, Gerry Cheevers, Andy Moog — meaning that they both might be better than I’m giving either credit for.

Truly, Halak has had an enviable career, with an All-Star game in 2015, two Jennings Trophy victories (the second shared with Rask this season), two trips to the Olympics with his native Slovakia along with a tour of duty with the assembled Team Europe in the 2016 World Cup and, something I’ve thought of this past week, one memorable run through the 2010 playoffs with the Montreal Canadiens that almost saw him displace Carey Price as the chosen one in bleu, blanc et rouge.

I’ve been thinking about that stretch lately, when the 24-year-old Halak put up a .923 save percentage before the Habs fell to Philadelphia in the Eastern Conference finals. When Montreal traded him to St. Louis that offseason, I thought they were nuts to give up on him and put so much back on Price. Halak’s nice career aside, I don’t think they’ve actually sweated that decision since.

Still, this is his first significant playoff assignment since 2015, when his New York Islanders bowed out of the first round in seven games. The Blues lost to the eventual champion Los Angeles Kings in the second round of 2012, but Brian Elliot had supplanted Halak as the starter by that point. For the Bruins to make bubble history, he’s going to have to play significant playoff hockey for the first time in a decade.

As weird as this season, this situation and this year have been, the sight of a team holding up the Cup and screaming in front of throngs of nothing is going to be pretty bizarre. In the face of that reality, having the Bruins pull it off with Halak standing on the back line shouldn’t even register on the strangeness scale. It’d be appropriate, even.